We will tell about development and implementation of self-organizing networks algorithms in real-time operating system MACS. Our solution was developed for chip Milandr 1968ВН034 with PLC and RF channels as the main features providing heterogeneity.

Listeners will get to learn about the specifics of implementing the G.9903 and 802.15.4 standards on microcontrollers running under the real-time operating system MACS. 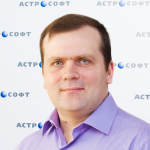 Head of Research and Development, AstroSoft

Head of R&D at AstroSoft, more than 20 years in IT.

Graduated with honors from Novgorod State University with a degree in Software for computers and automatization systems.

Alexey is an author of several scientific publications about system and embedded software and he often takes part in international conferences.